The QR Code is everywhere, but where did it come from?

The QR Code is everywhere, but where did it come from?

“We know the drill by now: before entering any shop/restaurant/building, whip out your smartphone, look for the SafeEntry QR code, scan it, enter your personal particulars, and finally tap “check-in”.”

Short on time? Check out this 90 second video for the QR Code origin story!

You’ve probably scanned more QR codes in the last few months than you did in your entire life. They’ve saved us from filling up endless paper forms on clipboards so let’s take a moment to know more about these black-and-white-heroes.

So just what exactly is a QR code?

When you use the self-checkout counter at a supermarket, you scan the barcodes of your purchases. The barcode contains data about the item it’s attached to, so the electronic cashier immediately knows you’re buying a bag of Kettle salt & fresh ground pepper potato chips the moment you scan it.

Well, the QR – which stands for “quick response” – code is basically a barcode on steroids. While the barcode holds information horizontally, the QR code does so both horizontally and vertically. This enables the QR code to hold over a hundred times more information.

How did it come about?

In the early 1990s, barcode scanning was becoming increasingly laborious. Each barcode could hold just 20 characters of data, so it often took multiple barcodes on a box to convey what was inside. When a Japanese engineer by the name of Hara Masahiro – who made barcode scanners for a living – learnt of the problem, he set about solving it.

Together with his team, Hara developed a two-dimensional barcode in the shape of a square, tackling the issue of limited data capacity. However, when these new barcodes were printed with other forms of text next to them, scanning machines could not pick them up. This rendered the square barcodes impractical.

This impasse was overcome one day when Hara, looking out of the subway window on the way to work, noticed that skyscrapers stood out distinctively from the rest of the landscape. He began searching for ways to distinguish the square barcodes from text.

Finally, he landed on the solution of embedding three small squares (with a specific ratio of black-to-white areas) at the corners of the new barcode, enabling scanners to recognise it instantaneously. 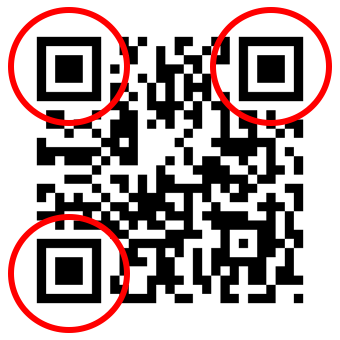 QR Codes are anchored by squares in the corner. Now you know what they are for!

Like what you’re reading? Join our newsletter to get the latest stories and tech insights.

Another issue that Hara mulled over was whether the new barcode could still be read if it was obscured by smudges or otherwise damaged.

Again, he gleaned inspiration from his surroundings, this time while playing Go (the japanese board game, not Pokemon Go) during lunch. Although players were supposed to place their pieces on the intersections of the grid board, he noticed that you could still figure out where a piece is supposed to be even if its placement is slightly off. This gave him confidence that barcode scanners could similarly understand square barcodes that were imperfect.

Indeed, QR codes today are known for their robustness and can be scanned even when part of it is missing or covered. Brands sometimes make use of this feature by placing their logo in a QR code to drum up some brand recognition without compromising functionality.

In 1994, Hara was finally ready to roll out his brainchild. As Hara worked for a subsidiary of a car components manufacturer, he demonstrated its use at an automobile trade meeting, winning over representatives from several firms.

Japan’s car companies quickly adopted them after the successful showcase, a strong vote of confidence in this new invention.

From obscurity to ubiquity

The QR code might have just remained a workhorse for product cataloguing if it had not been for another invention: mobile devices with cameras. As people soon became inseparable from their smartphones, everyone always had a QR code scanner at their fingertips wherever they went.

That said, its rise to mainstream adoption wasn’t easy. As recent as the 2010s, you needed to download a variety of apps to scan various codes. Very frustrating and not exactly what we’d call good user experience.

But as it turns out, QR codes were just ahead of their time. It took awhile for smartphones to catch up, but these days, you no longer need a separate app to scan QR codes. For instance, iPhones with iOS 11 (launched in 2017) or later can read QR codes using just the standard camera app.

Nowadays, QR codes are used in a myriad of purposes such as:

And of course, the QR code enables SafeEntry in Singapore right now. The system is vital in ensuring that contact tracers can do their jobs even as Singapore progressively reopens and people-to-people interactions inevitably increase.

So when you’re out and about, whip out your smartphone and do your part.