Find out what zero-day vulnerabilities are and how white-hat hackers at GovTech’s Cyber Security Group are hunting them down to keep government systems safe.

Staying home is essential for keeping us safe during this global COVID-19 pandemic. Yet, now more than ever, our increased dependence on the internet could expose us to a multitude of non-biological threats: computer bugs rather than actual viruses.

Take for example the recent report on security issues within a popular video conferencing app—security experts found that the software contained weak spots that exposed users’ microphones or cameras to potential attacks by malicious hackers. For those who haven’t bothered with makeup or a haircut, look out!

Unknown—and therefore unaddressed—security issues like these are known as zero-day vulnerabilities, named for the fact that developers have zero days to fix the issue that has just been discovered. Zero-day vulnerabilities have various levels of severity: from minor ones that expose non-sensitive information, to critical ones that could cause entire systems to crash. Regardless of severity, they provide a window of opportunity for hackers and other malicious actors to exploit the vulnerability to compromise the system.

To avoid zero-day exploits that could lead to serious problems, cybersecurity experts race to uncover the vulnerabilities before hackers do, and help organisations remedy these security flaws. At GovTech, a dedicated team of “white-hat” or ethical hackers from the Cyber Security Group (CSG) hunt down potential zero-day vulnerabilities to ensure government systems stay safe and protected. We spoke to three of them from the Advanced Cyber Attack Simulation (ACAS) team to find out more about what they do and why.

“We hack ourselves first, before the bad guys do,” explained Mr Goh Jing Loon, an Associate Cybersecurity Specialist who discovered a zero-day vulnerability in an open-source software that could be exploited to control devices in a smart home.

Ethical hacking is a wide field in which white-hat hackers conduct operations such as penetration testing, malware research and reverse engineering within the legal framework. “Prior to every engagement, the scope and rules of engagement are clearly defined and strictly adhered to during the project,” Jing Loon explained. “It is a common practice for companies to engage such services on their own systems too.”

Conducting penetration testing on government systems helps to reduce the number of unknowns. These unknowns, when exploited, can have dire consequences. “Not every zero-day vulnerability is reported or immediately exploited; some of the more critical ones would be stored in cyber arsenals that could be sold to the highest bidder and used against a target,” explained Ms Loke Hui Yi, a Cybersecurity Specialist from CSG’s Exploit Development & Infrastructure team.

“By conducting these tests on our own systems, we seek to reduce potential incoming attack vectors,” she added. “Penetration testing is important as we always want to reduce the ‘unknown unknown’ sample space, which is the space that has no defence. It’s better to know if a product is insecure than to get caught flatfooted.” 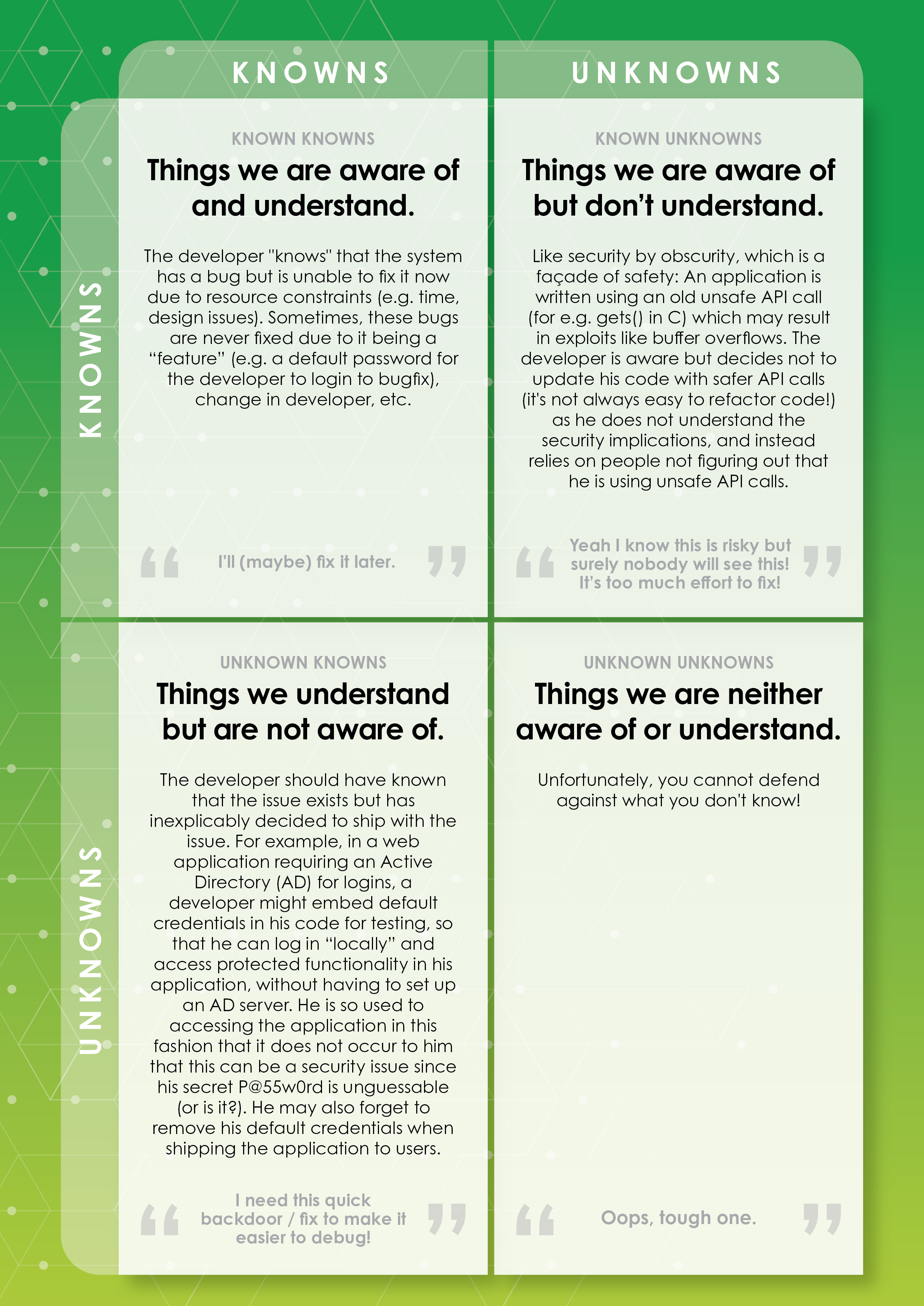 We hunt persistently, so you can rest easy

Hui Yi describes the bug hunting process as “one-part elbow grease, two-parts boundary testing and seven-parts pure serendipity.” On why she attributed her efforts to chance, Hui Yi explained that zero-day vulnerabilities are often so well hidden, that even the developers are unaware. Unearthing such stealthy bugs can feel like immense luck is required. “Of course, it also takes persistence and efforts in boundary testing.”

Boundary testing refers to testing the limits of a system, whether it be at the upper or lower end. For example, when testing a HTML rendering product, boundary testing involves testing out all possible combinations of HTML elements, their attributes and possible values, to see if any of them could cause the programme to work in an unintended fashion.

In the course of her work at GovTech, Hui Yi has uncovered several zero-day vulnerabilities, including a bug in a product providing internet security that was found to allow traffic from a user’s computer to the internet even though it was not configured to do so. In another internet protection product, she also found a bug that is caused by the failure to consider an obscure situation. Ironically for protective products, these bugs allowed malicious content to reach the user’s computer.

“Bug hunting is never easy, but systems are made by humans, and chances are there would always be loopholes to be uncovered—hopefully by the white hats first! Ultimately, it takes time, experience, intuition and some luck to discover zero-days. While luck can’t be influenced—apart from your fashion colour choices! —more practice and exposure to hacking real systems definitely helps to streamline your bug hunting workflow and sharpen your intuition.” Jing Loon explained.

Guarding humans is part of the job

While hacking government systems for a living might sound like the coolest job in the world, that is not all that the CSG team does.

“Systems are not the only thing we ‘hack’,” said Mr Miguel Tan, Cybersecurity Specialist. “We also look into different forms of social engineering, which are akin to zero-day vulnerabilities in the human aspect of things.” Instead of going through hours of effort to exploit a technical zero-day vulnerability, sometimes all a hacker needs to compromise a system is to “sweet talk” or social engineer the victim into revealing their login credentials, he explained.

To protect users from falling prey to phishing attacks and having their personal information compromised, the cybersecurity specialists at GovTech study the latest methods employed by malicious actors and educate users on the tell-tale signs of different forms of social engineering attempts and best practices to safeguard their data.

The work of GovTech’s cybersecurity specialists also supports Singapore’s journey towards a Smart Nation. Testing critical systems powering Singapore ensures that our Smart Nation initiatives and services, such as SingPass, Moments of Life, GoBusiness and Smart Nation Sensor Platform to name a few, are built upon robust and secure systems and infrastructure. Users can access services with a peace of mind, knowing that their accounts are protected.

“We are in a very privileged position – being able to access systems that the general public will not have a chance to interface with. If these government systems contain bugs, they may prove to be very valuable to malicious actors,” Miguel shared, on the team’s motivation to uncover vulnerabilities despite the challenges. “While we work to discover these bugs, we need integrity to do what we do, for the good of Singaporeans.”

“The key is to never give up and to always keep our mission in mind—to make Singapore a safer place to live in,” he concluded.