TL: DR: GovTech’s approach to digitalisation is not just technology for technology’s sake, said chief executive Kok Ping Soon. Instead, it involves a fundamental re-think of the government-citizen relationship. The goal is to go beyond providing frictionless services to delighting citizens.

These days, you can apply for a new passport, file your taxes and renew your library books all from the comfort of your home—or even on your mobile phone. One of the reasons all this is possible is that the Singaporean government has been committed to digitalisation since the 1980s, explained Government Technology Agency of Singapore (GovTech) chief executive Mr Kok Ping Soon.

“We have services that are well-acknowledged to be among the most comprehensive and responsive [in the world]; but we want to do even more,” said Mr Kok, speaking at the East-West Centre’s International Media Conference held at Singapore Management University from 24-27 June 2018.

For GovTech, “more” doesn’t mean simply chasing the latest technology fads or spicing up press releases with trendy buzzwords. Instead, going digital requires a completely different approach, one that radically alters the relationship between the government and its citizens, Mr Kok said.

“What that means is that the ambition of the Singapore government is not about digitalising for digitalisation’s sake. It’s not about taking existing forms and putting them onto the web,” he continued. “It is a fundamental re-thinking, re-imagining and re-engineering of our government processes.”

From ministry-centric to moments of life

In the past, digital services were thought of as a “linear value chain” that began with policy formulation and ended with technology implementation, Mr Kok explained. Singapore’s 16 different ministries and 84 agencies were organised accordingly, with structures that facilitated the flow from policy makers to operational staff who design a project’s specifications and finally to technology suppliers in charge of building the system.

But citizens do not interact with the government in such a linear fashion. A new mother, for instance, would need to register her child’s birth, apply for the Baby Bonus scheme and access her child’s immunisation and medical records, services that would require her to approach three different government agencies: the Immigration and Checkpoints Authority, the Ministry of Social and Family Development and the Health Promotion Board respectively.

The app is just one example of how the government has re-organised itself and integrated services around the needs of its citizens, Mr Kok said. As the name suggests, the moments of life approach will be extended to non-parents as the government continues to re-think services from the perspective of its citizens.

“Why stop at parents with young kids? What about helping working adults to stay relevant in the workforce or find new jobs? What about helping retirees?” Mr Kok asked. “We’re taking the moment of life approach deeper in each of these moments, as well as spreading [the approach] across different moments.”

From engagement to co-creation

Another thing that the government is now doing differently is getting citizens involved as early as possible, partnering them to co-create new services rather than simply collecting feedback after the service has been launched.

“It used to be that when we delivered digital services, citizens were the subject of study. We did focus groups to find out their needs and develop services for them. Citizens were involved, but somewhat downstream [in the process],” Mr Kok said.

“Now, we want to find platforms for us to co-create solutions with citizens. Because who better to tell us where the pain points are than the citizens themselves? One of the Digital Government Blueprint strategies is to co-create with citizens, businesses and industry solutions that are meant for them.”

Co-creation has proven to be a productive approach, particularly in the realm of transportation. For example, GovTech’s Beeline app makes public transport data available to private bus operators, allowing them to crowdsource demand for point-to-point bus services and adaptively plan their routes.

From satisfactory to delightful

Ultimately, digitalisation should be about treating the citizen as a customer and providing services that do not just satisfy but actually delight them, he added. “If we can deliver services that are easy to use, seamless and secure online, all we have done is reduce the inconveniences [of everyday life]. But doing more to delight citizens might be foreign to governments because unlike private companies, we are not trying to maximise revenue,” Mr Kok said. Nonetheless, it is essential for governments to embrace the “law of the customer” and focus on the needs of its citizenry, he said. To do this, GovTech starts developing new services by first going through what it calls a ‘service experience journey,’ evaluating every interaction with the government from the perspective of the user.

“Developing services in this way requires us to do things very differently, in a more agile manner. It requires the government to change its thinking and the way we approach policies,” Mr Kok said. “At the end of the day, building a smart nation requires a new level of partnership between the people, the private and the public sector.” 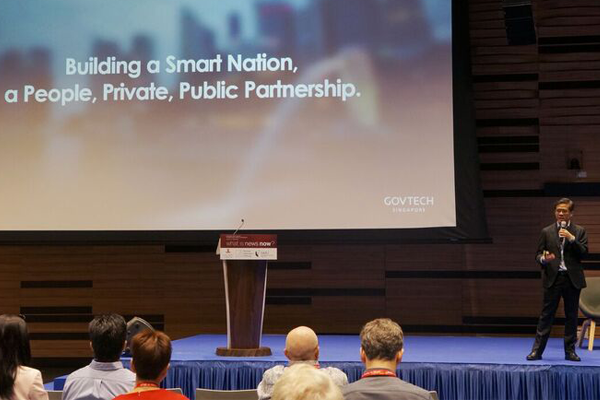