This temperature scanner developed by GovTech’s Smart Nation Platform Solutions (SNPS) team combines hardware and software for the best of both worlds.

While areas with low footfall can tap on GovTech’s self-service temperature scanner and gated venues like libraries can quickly implement VigilantGantry, many other places need to screen potentially large numbers of people with very little infrastructural support. Places like shopping malls and supermarkets, for example, are likely to see a high number of visitors despite the on-going “circuit breaker” social distancing measures, but do not have physical barriers to manage the flow of people.

In this final instalment of a three-part series on temperature scanning solutions for different challenges, we turn the spotlight on how GovTech’s Smart Nation Platform Solutions (SNPS) team developed a scalable, low-cost and accurate temperature scanning technology for mass screening that can be rapidly deployed.

“Our solution is focused on three things: being able to do crowd temperature screening, real-time screening and also screening at a safe distance,” said Mr Chong Jiayi, the engineer who led the SNPS team in the project. 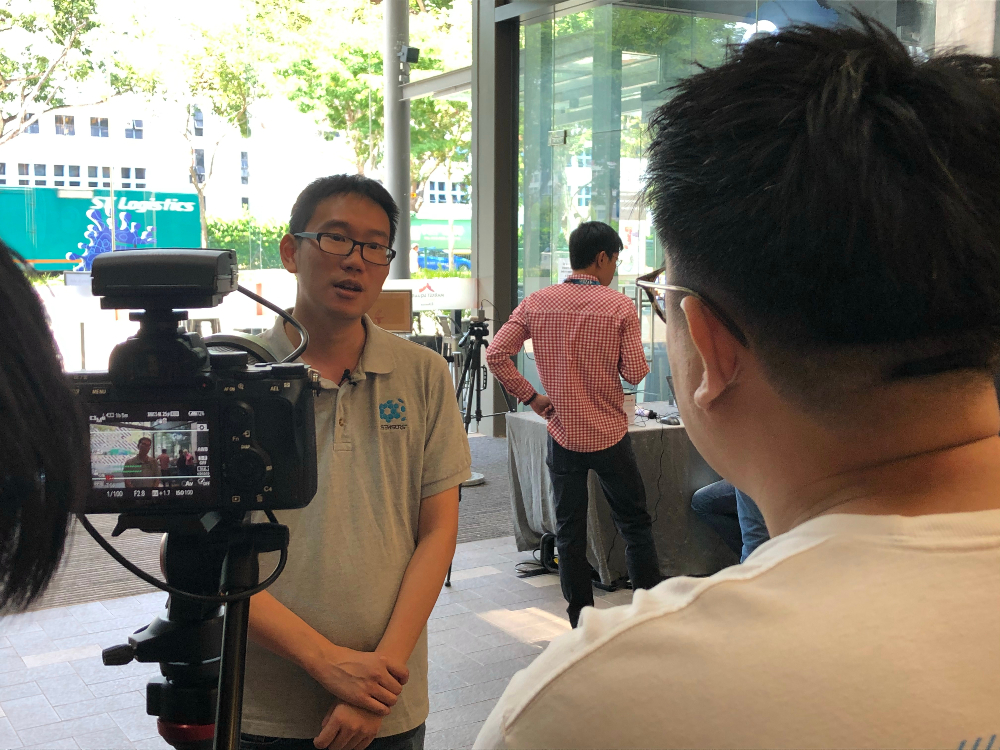 Letting software do its magic

The SNSP system doesn’t rely on fancy equipment to do its job. All it requires are commercial off-the-shelf hardware such as a thermal sensor and a webcam mounted on a 3D-printed case. This case is then hooked to a tripod that can be adjusted to an optimal height for detecting human body temperature. Unlike other detection systems that require permanent fixtures at certain locations, this one is mobile and can be set up without much ado.

“It’s the software that’s doing the magic,” said Mr Chong as he explained the inner workings of the temperature screening device. Footage from both the thermal sensor and webcam are used to train the software to contextualise the information captured by both sensors, he explained. Once trained, the artificial intelligence (AI) can then automatically measure the temperature of the faces that come into its view. If anyone with a fever enters the frame, the device alerts the person-in-charge.

“This solution is unique because it uses a hybrid hardware and software, AI-driven solution. I don’t think there’s many of those in the market today,” he added.

The challenge of building this temperature screening solution did not merely depend getting the technology right, but also making sure that it could be widely implemented. “Our entire design is developed on the philosophy that hardware today is a commodity and that the solution should not be limited by the hardware it uses,” he said.

“We’re not just saying that we can do something efficiently; efficiency allows our solution to be deployed on a wider range of lower-tier hardware, which increases the coverage of our solution,” Mr Chong explained. “It’s the reason why we could drive the cost of our solution so low.”

It is precisely this design principle that sets their model apart from VigilantGantry, a contactless, mass temperature screening solution developed by another team at GovTech. Instead of leveraging on existing infrastructure like gantries at the entrance of libraries, the SNSP solution can be deployed anywhere using low-cost hardware. “The actual setup takes less than five minutes, and it still manages to be cheap and effective all at once,” Mr Chong said.

Rolled out in record time

Building on a flexible robotics framework that the team was already working on helped to shorten the development process, Mr Chong shared. “We got the core system up and running in just seven days, but we did not build it from scratch,” he said. Just two days after building the prototype, the team was able to set up their first live trial at Downtown East, where the device screened over 400 people.

Ms Felice Low, the head of Infrastructure, Engineering and Security at NTUC Club which runs Downtown East, told TechNews that the device had been effective in speeding up the process of temperature screening for visitors and also streamlining of manpower resources.

The temperature screening device is currently under trial at several government agencies and partner sites.