Mosquitoes and data fall into place with NEA’s Gravitrap project

Mosquitoes and data fall into place with NEA’s Gravitrap project

One of them is primitive, with origins dating back to at least the Jurassic period. The other is a marvel of the 21st century; made possible only by recent advancements in human technology. Ancient vs cutting edge, nature vs nurture. Almost impossible to reconcile.

With that in mind, we approached Goh Jie Wei, Data Analyst from NEA to shed more light on the project. Here’s what he had to say.

Short on time? Catch this video to get the quick brief on how data is being used to fight dengue!

What and how does a Gravitrap work?

The Gravitrap is designed to attract and trap gravid female Aedes mosquitoes – gravid here means egg-carrying, or if you prefer a human term – pregnant.

Anyway, when these mosquitoes try to lay eggs in a Gravitrap, the sticky lining traps them, ensuring they can’t leave the trap. At the same time, due to the design, the Gravitrap prevents emergence of any mosquitoes from eggs that are laid in the trap. Here’s a fun fact: many people are concerned that more mosquitoes will bite them because of Gravitraps. Truth is, you’ve got nothing to fear: Female mosquitoes typically feed on blood, but only when they are looking to produce eggs.

Gravid female Aedes mosquitoes have already produced these eggs, so they will not bite people!

In January 2020, NEA completed the Gravitrap deployment in private landed estates, complementing those already deployed at HDB estates since 2017.

Before that, Gravitraps were mainly deployed along the common corridors or staircases of HDB residential blocks. We now have more than 64,000 Gravitraps deployed island-wide to monitor the Aedes aegypti mosquito population in Singapore. 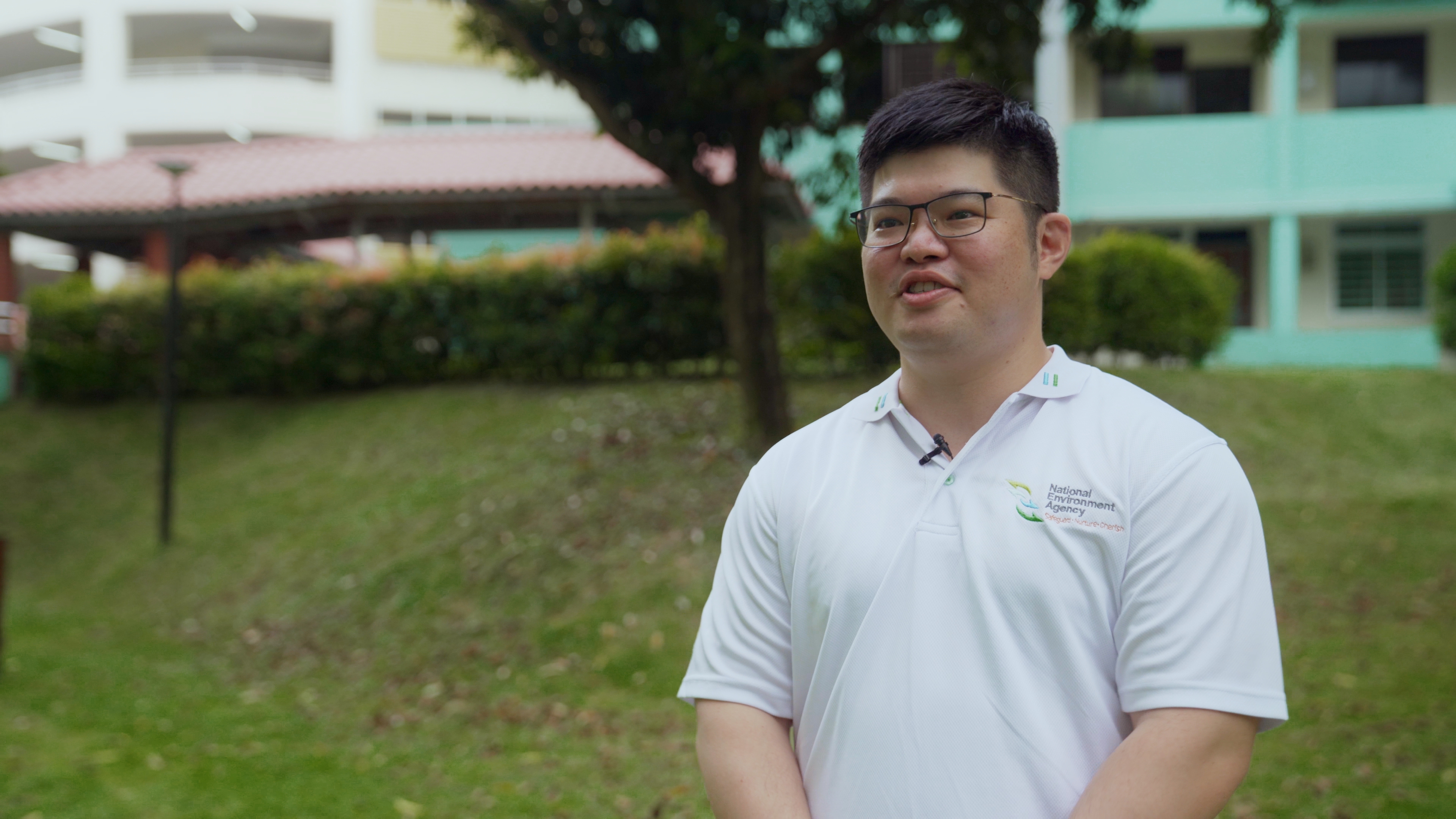 Read on to find out how Wei Jie from NEA uses data to fight dengue!

How does Gravitrap fit into NEA’s bigger efforts?

Gravitraps, when distributed across an area, allow NEA to monitor the Aedes aegypti mosquito population in the vicinity. NEA checks and maintains the Gravitraps fortnightly to ensure that they are functioning properly – and trapped mosquitoes are actually collected and identified up to the species level.

Information such as the number of mosquitoes trapped, species of mosquitoes, location and functional status of the Gravitraps are collated for further analyses, and later used to guide NEA’s vector control efforts.

That way, NEA can prioritise its resources, with greater precision at areas with higher Aedes aegypti mosquito population to search and destroy the breeding habitats that could be sustaining the populations!

Public Service Announcement: Misplace or toppled Gravitraps disrupt NEA’s island-wide Gravitrap surveillance network and could lead to gaps in our intelligence at the localised level! So, please do not remove or tamper with the Gravitraps – they are definitely not ashtrays!

What does NEA do with all the data it collects?

NEA develops trends and assessments on the mosquito population at the national and localised levels. This is then used to optimise its resources to areas with high Aedes aegypti mosquito population; a shift towards risk-based approach for effective use of resources.

The processed data also informs NEA’s targeted approach to public communications (via mainstream media and also shared monthly through the myENV app and NEA’s website) to increase awareness among stakeholders and the community of the risk of dengue and take proactive mosquito prevention measures.

Through the myENV app, members of the public who have subscribed to the alerts are notified if they are staying within areas of high Aedes aegypti mosquito population and will be urged to carry out their own checks in their homes.

Such information is also shared with key stakeholders such as IADTF(interagency dengue task force) members to enable them to take timely action to mitigate transmission.

What advice do you have for those of us living in dengue prone areas?

It depends on what zone you live in!

Residents residing in red and yellow dengue clusters should protect themselves against dengue fever by spraying insecticide in dark corners of the house, applying insect repellent regularly, and wearing long sleeve tops and long pants.

They should also do the Mozzie Wipe-out steps frequently to remove stagnant water from their homes and immediate surroundings to deprive the mosquitoes of breeding habitats.

To see whether your neighbourhood is in a red, yellow or green zone, check out the NEA website and the myENV app. Updates happen every workday! Do also check out data.gov.sg to find out more information about dengue data patterns in Singapore!