Did you know that drones play a critical role when it comes SLA’s inspection work?

What do the National Parks Board (NParks), Elections Department of Singapore (ELD), and Singapore Land Authority (SLA) have in common, other than being government agencies?

They all deal with managing large areas of space across the country and that’s where technology comes in – in the form of GovTech’s Modelling and Simulation (M&S) team.

The cross-agency division brings together expertise in geospatial information systems, data, 3D visualisation, and other tech to aid in city planning and management.

Don’t worry if that sounds like a mouthful. Let’s explore what the team does in each agency to get a better sense of their role in different spheres of government work!

A key role of SLA is to maintain state land and property. In 2016, the agency started using drones and machine learning to tackle this manpower- and time-intensive task.

Drones, after all, cover long distances much faster than people can. They can also easily fly to areas of buildings that cannot be visually inspected from ground level. With drones, there is no need to deploy machines such as cherry pickers, boom-lifts and lorry cranes which may not be able to access hard-to-reach areas. Drones can also be deployed to inspect areas of dense vegetation. “Overall, the safety risk that officers face is greatly reduced as they are less exposed to high heights and insect bites during their inspection work, especially on state land with dense vegetation.” Said Roy New, Senior IT Manager at SLA.

SLA officers can also review images captured by the drones on the go. Machine learning is used to pick up images that show potential maintenance issues, so officers need to review only a smaller subset of images rather than the entire library, which can go up to hundreds of pictures.

And the vast amounts of data generated by modern systems is also put to good use. For example, GPS information embedded in the metadata of images that drones capture is extracted and plotted on a 2D map to show where the images were taken.

3D objects are also generated via photogrammetry to visualise the building and its general location.

With the map and 3D view, officers can quickly identify the location of maintenance issues instead of looking at images of just grass patches or grey walls and trying to hunt down where the picture was taken.

The result? The time required for physical inspection has gone down from eight hours to just one. Early detection of maintenance issues is also estimated to reduce repair costs by as much as 40 per cent.

The ELD, which plans and runs the elections in Singapore, deals with large amounts of data from different source agencies. For instance, the make-up and size of constituencies are determined by the population within them, so the department must have up-to-date residential information.

Derrick Ong, Geospatial Information System Architect at ELD, shared that the recent move to a cloud-based system has enabled the team to access data more readily and work collaboratively with greater ease, reducing the amount of manual work involved in data preparation.

Another aspect of ELD’s work is using geospatial information to plan and visualise electoral boundaries, which are refreshed before every general election. The technology allows officers to better organise polling districts within each constituency and the polling stations where citizens go to vote, ensuring a good distribution of voters to minimise the possibility of long queues forming.

When Singapore implemented Covid-19 safe management measures such as the restriction of access to shopping centres, there was a sharp increase in visitors to the island’s 350 parks and gardens as people turned to green spaces for recreation. 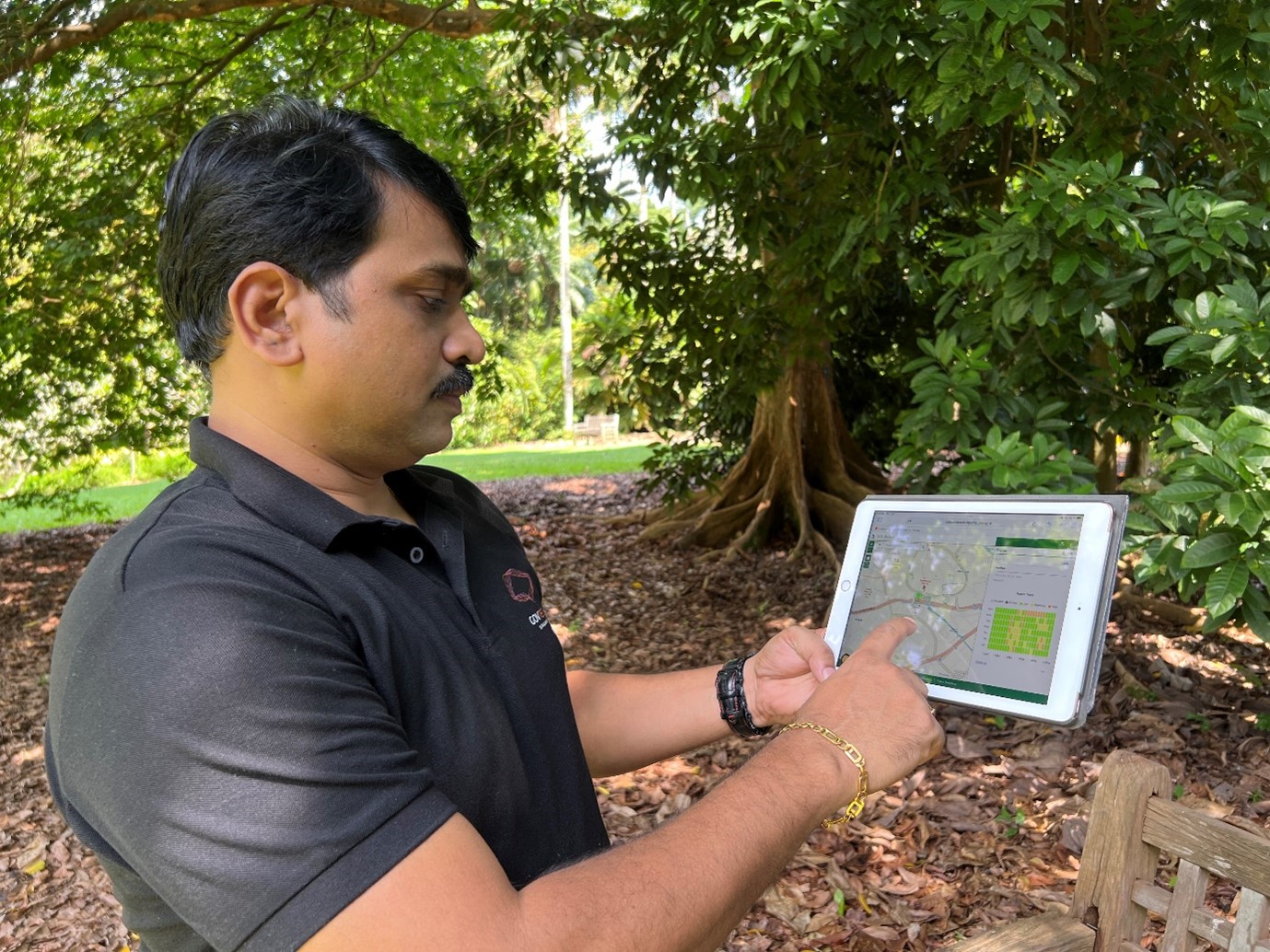 In response to this surge in footfall, NParks collaborated with GovTech to develop a map-based public portal. SafeDist@Parks Portal, to share park closure information. Visitors were empowered to take ownership of their personal and communal safety, making informed decisions to avoid crowded parks during peak periods.

The portal was well received by both the public and NParks officers for helping them to manage the crowd at popular parks, reducing manpower demands at more than 500 green spaces across Singapore. “The portal enabled Singaporeans to seek respite at our parks and gardens, and experience the benefits of nature and greenery for their well-being during the pandemic.” said Abhishek Tandon, Deputy Director of Geospatial Development at NParks. “It is an excellent example of our commitment to use technology in an agile manner to make people’s lives better.”

The portal also won the Special Achievement in Geospatial Information System award at the Esri User Conference held in July 2022.

Ultimately, all the teams agree that the process of engineering a digital public sector can be a long and painful process.

For instance, when transitioning to the cloud, the ELD team spent countless hours going through existing documentation of the existing system to understand what features the new system required and which were obsolete. They also held many rounds of meetings with business users to record a wish list for the revamped system.

But they also believe that the pain is worth it as the long-term rewards of digitalisation are immense and they gain satisfaction from users acknowledging the effort and benefit the new system brings to them: greater convenience that enables the public sector to make lives better.