‘Tech sector booming – why you work for gahmen?’ and other questions you always wanted to ask a Smart Nation scholar

‘Tech sector booming – why you work for gahmen?’ and other questions you always wanted to ask a Smart Nation scholar

When it comes to jobs, it’s a great time to be in tech. As a tech hub, Singapore houses the regional headquarters of tech giants from the US (such as Google, Facebook) and China (like TenCent and ByteDance), while Southeast Asian unicorns (Grab and Gojek, to name just two) maintain large offices here as well. 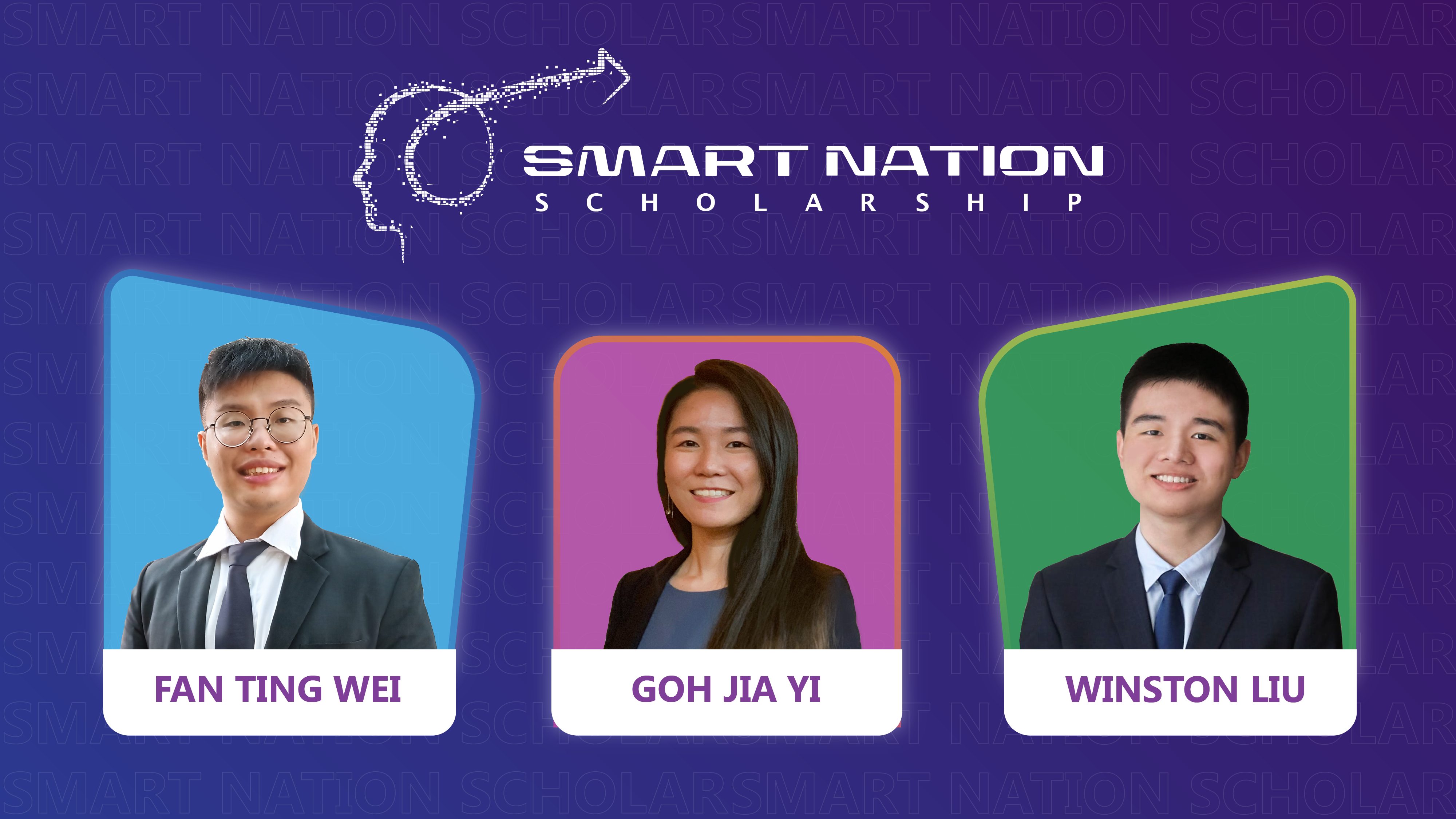 With the abundance of enticing opportunities, why would a techie choose to go into the public sector? That was the top question we had when we got the chance to talk to three undergraduates who are on the Smart Nation Scholarship programme – a scheme that supports the education of future tech professionals in the public service.

Chatting with Goh Jia Yi, Fan Ting Wei, and Winston Liu, we also got to ask about some of the public service culture, cool projects they’ve done, and what draws them to tech. But first, on to the burning question in our minds.

Hey guys! Let’s do a round of introductions before we begin, which schools are you from and what are you studying?

Tech is a hot industry now and it seems like every computer science undergrad is talking about which FAANG company to try to get into and I’m sure your peers must be doing the same. Don’t you have FAANG FOMO?

Jia Yi: Haha, not really! Joining the public service was in line with my personal goal – to improve and touch the lives of many with the tech I create. I have worked on meaningful large-scale projects that have helped many communities in our society, not just people who buy or use certain products.

Ting Wei: Yeah, I second that! As someone who does data science, I like that I get to work on data sets that are of an entirely different scale and nature, which is something that you can only experience in the public sector.

OK, so what are some of the projects that you guys have worked on?

Winston: I was a software intern, under the embedded systems team in the Sensors and Internet of Things (SIOT) division, involved in two projects in particular - the Botanic Gardens smart lamppost project, and a similar smart lamppost project for Gardens by the Bay. I worked on the software that ran the SensorPod product, which provided the computing power behind the operating of each lamppost and the uploading of sensor data to the cloud. You might be thinking, ‘it’s just a lamppost, why must it be so high tech?’ Well, sensors on the lampposts can perform a variety of functions such as analyse crowd sizes to know if there’s overcrowding, or analyse the speed of personal mobility devices to enhance public safety. Lampposts are ubiquitous in Singapore, so you can imagine the vast potential of linking them all in a network.

Jia Yi: During my latest internship, I was a machine learning intern in SIOT that helped to build a device to detect exercises performed and count the number of reps from videos captured in real-time. This device will reduce human supervision required for IPPT, meaning that IPPT sessions can be held in more places and more frequently. Servicemen and servicewomen will find it more convenient to take their annual fitness test. Ha, yeah it also means you don’t have to worry if you’re getting tekaned during your IPPT by an extra-strict supervisor.

Ting Wei: The pandemic has taken its toll on the jobs market in Singapore, so a priority of the government is getting Singaporeans working again. I was a software engineer intern that contributed to the government’s efforts to alleviate job losses by fine tuning the job recommendation system on job portals, so that job seekers get to see opportunities that are more relevant to their skillsets. This was during my internship with the JumpStart team in GovTech’s Data Science and Artificial Intelligence Division (DSAID). I remember feeling that this was so much more consequential than the algorithm behind the shows you get recommended to watch next on your favourite video apps.

What about culture then? One big draw of the tech industry is the cool work environment in large tech firms or the flexibility from the flat structure of a startup. In contrast, the public service is sometimes seen as a more traditional, hierarchical organisation that is slow to adapt to change. Don’t you worry you’re not getting the full tech experience?

Ting Wei: That hasn’t been my experience during my internships though. I used GitHub, Jupyter Notebooks, and Databricks for my coding work, while communication and daily standups were on Slack. I had the opportunity to attend brownbag sessions on frontend development, cybersecurity, and application hosting by engineers in other departments. When I talk to my friends who work in the private sector, I don’t sense much difference in terms of culture that they experienced.

Winston: That was my experience as well. I loved how I was provided the flexibility to create and implement features the way I thought was best as long as I could justify them, and I took full advantage of that to explore new approaches. We use the Agile Scrum development life cycle that allowed me to pitch my ideas and learn from the experiences of others on the team in an iterative cycle that made development much more enjoyable and productive.

Jia Yi: Yeah, government agencies sometimes get an unfair bad rep, but my experience at GovTech was not stagnant at all. As my internship coincided with the COVID-19 Circuit Breaker, my supervisor and other colleagues were busy deploying COVID-19 projects on top of their existing work. I witnessed the agility of GovTechies firsthand and how then have consistently pushed boundaries.

So how did you get into tech? As they say in superhero movies, what’s your origin story?

Jia Yi: I had early exposure to computer games and starting dabbling in coding when I was about 10. You know how as a kid it was really really important to have a unique looking blog? Making blog skins was my intro to HTML and CSS and I found it fascinating that lines of code could generate such colourful visuals. That got me wondering, what else can these codes do for us? At some point, I knew that tech was the path I wanted to follow for me to learn more about programming and its functionalities. Ting Wei: Haha yes playing computer games was my first exposure to tech! In my secondary school days, while I had access to a laptop, my usage of it was restricted to school related purposes, so making computer games as part of computer studies in school was in the gray area that was accepted by my parents. Yeah, sneaky, I know. . After learning about making mini games like snake on Pygames, I was drawn into the world of competitive programming by my seniors through my involvement in the Infocomm Club. It was then when I realize my interest in solving real life problems through algorithms and analytics, and upon graduating from Junior College, I decided to take on the course of industrial system engineering that does exactly that.

Winston: Tech is like a life hack for me. When I was in school, I programmed a lot of productivity tools for studying and writing. Later on in NS, I was helping my team to automate tasks, to be efficient. I’m thankful I learnt how to programme when I was fairly young, but I was never really sure about my academic plans and career until I was in Junior College when I discovered the joy of creating software that other users enjoyed – that when I was inspired to pursue tech.

Looks like all of you had an early start into tech. There’s this stereotype of the computer club nerd in school. So… are you guys nerds? What can we find you doing on the weekends?

Winston: We have other interests beyond computers! I got into speedcubing when I was 10 and still have a Rubik’s cube with me wherever I go. I’ve also been playing the piano since I was a child and enjoy exploring the world. I’d love to be able to visit a new country every weekend to discover new cultures and new food, and I take every opportunity to explore new locations – even when I am unable to travel overseas, I love exploring local landmarks and locations that are less-explored.

Ting Wei: My nerdiest hobby is probably gaming. You are likely to find me active on Discord on the weekends playing a variety of games, such as Dota 2, Valorant and Minecraft. But not everything I do involves a screen. I also like to play contract bridge, which I learnt in Junior College to play card legally in school (again with the grey areas). People often think that Bridge is just a game of luck, but Contract Bridge is a real mind sport with no luck involved for all ages.

Jia Yi: I do have many hobbies but during the school term it’s hard for me to commit to them. My “mainstream” interests are probably being on TikTok 24/7 and watching Korean shows!

Any advice for those who are interested in the Smart Nation Scholarship?

Ting Wei: There are lots of information sources out there, such as the blogs written by various GovTech teams, where you can learn about the work GovTech does and whether it’s your cup of tea. Through the application process and various events hosted for GovTechies, I got to know many people who are passionate about technology. That helped me make up my mind that this community is something I wanted to be part of. If you have questions about the scholarship, will recommend chatting with our friendly Young Talent Programme Office team to find out more. You can drop them an email at AreYouIt@tech.gov.sg!

Winston: The scholarship was a great way for me to launch my career in tech. If you have an interest in how technology can be integrated with government policy and public utilities, then you should have a go. Perhaps you can try out for an internship too to get a feel of the working culture before committing. GovTech is all about the people – even though the organisation makes a lot of excellent products that sets it apart from governments all around the world, but in the end, it was the working environment and people in GovTech that attracted me. The many times I visited GovTech and my experience interning at GovTech only served to affirm my choice in GovTech.

Jia Yi: I think it helps to feel like you’re part of something greater than yourself. After learning of the Smart Nation initiative shortly after it was launched, I saw the potential of tech bringing convenience to everyone. GovTech’s mission and values are really aligned with my personal goals so it was a natural choice for me, and I feel like I’m making a contribution to make Singapore a better place to live in.

We welcome applications from pre-tertiary students as well as undergraduates who have completed at least one semester in university and have yet to start their final year of study.

Find out more about Smart Nation Scholarship at: www.go.gov.sg/smartnationscholar.