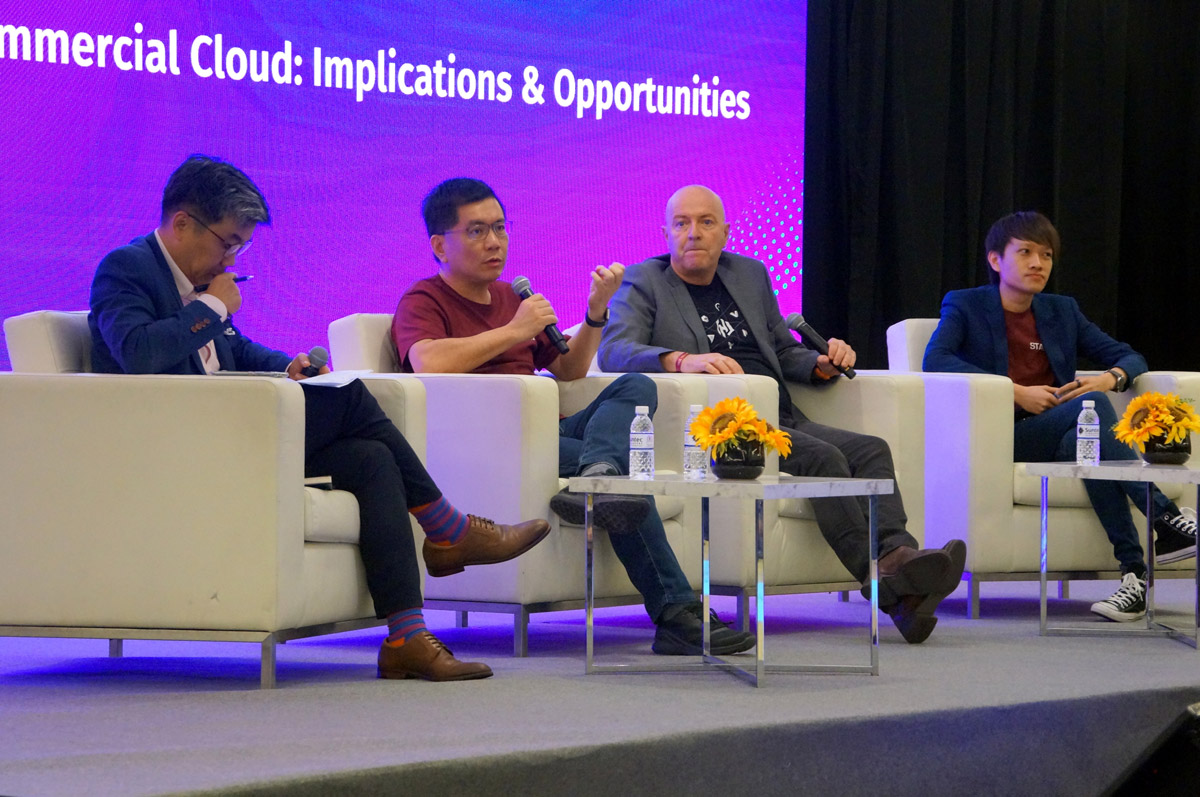 Digital services are being built on commercial cloud systems by the Singapore Government; and what this means for both individuals and businesses, as discussed by a panel at the Smart Nation & Digital Government Industry Briefing 2019.

In the digital era, common words are taking on new meanings. ‘Cloud’, for instance, no longer refers only to the fluffy white blobs floating in the sky, but now also denotes a computing framework for remotely storing, managing and processing data.

Multinational conglomerates like Amazon, Google and Microsoft are leading the cloud computing revolution, providing organisations with ‘commercial cloud’ options that are scalable and customisable. Rather than mired in the cost and hassle of racking, stacking and maintaining computing hardware on-site, developer teams can instead focus on what they do best—build and deliver digital applications that create value for stakeholders within and beyond their organisation.

In October 2018, Prime Minister of Singapore Mr Lee Hsien Loong announced that the government would be moving a part of its IT systems onto commercial clouds. During a discussion titled ‘Government on Commercial Cloud: Implications & Opportunities’ at the Smart Nation & Digital Government Industry Briefing 2019, a distinguished panel explored the benefits and potential business opportunities arising from this move.

Standing on the shoulders of giants

“I think one of the myths that I really want to dispel from the start is that the Government is moving to commercial cloud just because of cost. Cost is not the primary motive,” said Mr Chan Cheow Hoe, Government Chief Digital Technology Officer and Deputy Chief Executive of the Government Technology Agency of Singapore (GovTech).

Rather, Mr Chan noted that the key advantage of building applications on a commercial cloud is access to a global ecosystem of solutions and services such as application programming interfaces (APIs) and software-as-a-service (SaaS). No one has a monopoly on digital innovation, so by observing, adapting and contributing to the state-of-the-art in the digital realm, the quality of digital products can be improved.

Mr Clement Wong, Cloud Solution Strategist (APAC & Japan) of VMWare agreed. “If someone out there has built a great tool, you want to leverage it. The cloud allows you to do so and focus on what is truly important. For the Government, it is about improving the citizens’ experience,” he said.

Despite these advantages, critics have raised concerns about cybersecurity when the Government’s (and citizens’) data is stored on commercial cloud systems. Hence, migration to the cloud requires leaders in government to rethink approaches to maintain data security.

Traditionally, when data is stored on premise, it is easily safeguarded at the perimeter using firewalls and other access controls. “We call it a castle environment. You dig a moat around it, have a drawbridge and [this allows you to] control exactly what is coming in and going out,” said Mr David Carless, vice president (sales) of HashiCorp.

However, the boundaries in a cloud environment are less clear, therefore security is based on the authentication of a user’s identity before access to a service, application or data stored on the cloud is granted, Mr Carless explained. He added that all commercial cloud providers already have robust authentication systems in place, which means that risks are being accounted for and mitigated.

With safeguards to protect data on the cloud, Mr Howie Lau, Chief Industry Development Officer of the Info-communications Media Development Authority (IMDA), believes that the use of commercial cloud for government digital services will continue to grow. What this also represents is an opportunity for industry players and vendors to work with the government to co-create value for citizens and clients.

Mr Chan observed that the cloud service provider Salesforce has hundreds of developers working on their platform, ranging from those building simple APIs to those creating sophisticated SaaS solutions. He believes that a similar model could work for the government, in which individuals, as well as businesses big and small, actively contribute to the government’s applications on the cloud.

“This is a democratisation of technology. It’s about enabling anyone who can contribute to the Government to do so, without having to go through a lot of pain,” Mr Chan concluded.