Sparking a love for coding in kids

Sparking a love for coding in kids 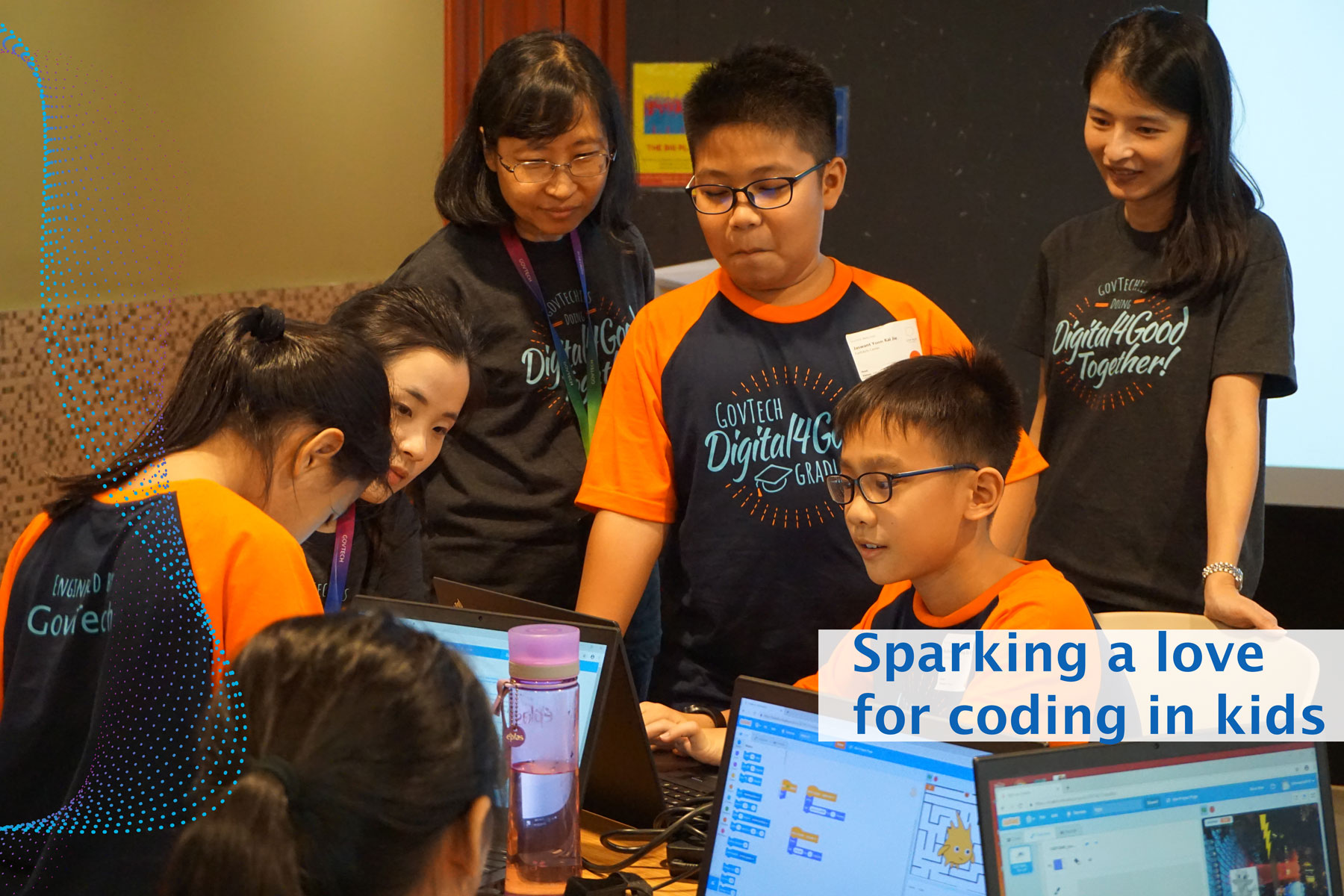 Children as young as eight learnt to build applications from scratch ; made possible by GovTech staff volunteers who participated in GovTech’s signature Digital4Good programme from 5 March to 14 May 2019.

Children growing up in today’s fast-paced, digitalised world could find that in addition to picking up conversational languages like English and their mother tongue, understanding the language of computers—coding—is just as important. And like any other skill, starting the learning process early in life can result in much stronger competency later on.

However, there are unique challenges in introducing children to coding. For starters, coding is highly abstract and technical. Many parents may find it incredibly difficult to get their kids excited over reams of alien-looking programming code. But the coding gurus at the Government Technology Agency of Singapore (GovTech) were unfazed!

Beginning on 5 March 2019, 101 GovTechies volunteered their time to run GovTech’s signature Digital4Good programme, meant to promote digital inclusion of underprivileged children and spark their interest in technology. The programme was organised in collaboration with FaithActs—a non-profit organisation that works to meet community needs and provides diverse programmes catering to different segments of society—and Saturday Kids, a coding school known for its youth-centric programmes and coding camps.

Over a span of ten weeks, 23 children between the ages of eight and 12 years old spent two hours each week learning the fundamentals of coding. During the programme, the children were taught to use Scratch, a visual programming language developed by the Media Lab at the Massachusetts Institute of Technology in the US. Scratch was designed with children in mind, with its cute and colourful block-based visual interface that is easy to use and understand.

The final session of the programme took place on 14 May 2019 and saw the young participants showcasing the fruits of their labour. Many of the coding projects involved the creation of games such as dodgeball, or borrowed concepts from highly popular games such as ‘Pac-Man’ and ‘Where’s Wally?’

One project that stood apart from the rest was called ‘Meme Music’. Designed by Jia Wei, a self-professed aficionado of songs that accompany internet memes, the application functioned like a ‘mixer board’, allowing the user the play several pieces of popular music and even overlay any piece of music with another. ‘Meme Music’ also incorporated entertaining graphics using funny internet memes such as Nyan Cat.

Another notable project was by Siva, the youngest member of the class, who designed a game called ‘Dinosaur Maze’. In this game, the player had to navigate themselves out of a maze while evading a dinosaur, all under one minute—a challenging task for an adult, let alone children. Even the GovTechies were hard pressed to complete the mission within the time limit!

At the end of the show-and-tell was the graduation ceremony, during which GovTech Chief Executive Mr Kok Ping Soon presented each child with a certificate. All in all, the programme successfully demonstrated that one is never too young to start picking up the fundamentals of coding. With some imagination and perseverance, anyone can develop great digital applications, and perhaps when these children grow up, they too will contribute towards building Singapore into a Smart Nation.

If you want to read more about coding…