How Government and Corporates Can Collaborate to Drive Blockchain innovation

How Government and Corporates Can Collaborate to Drive Blockchain innovation 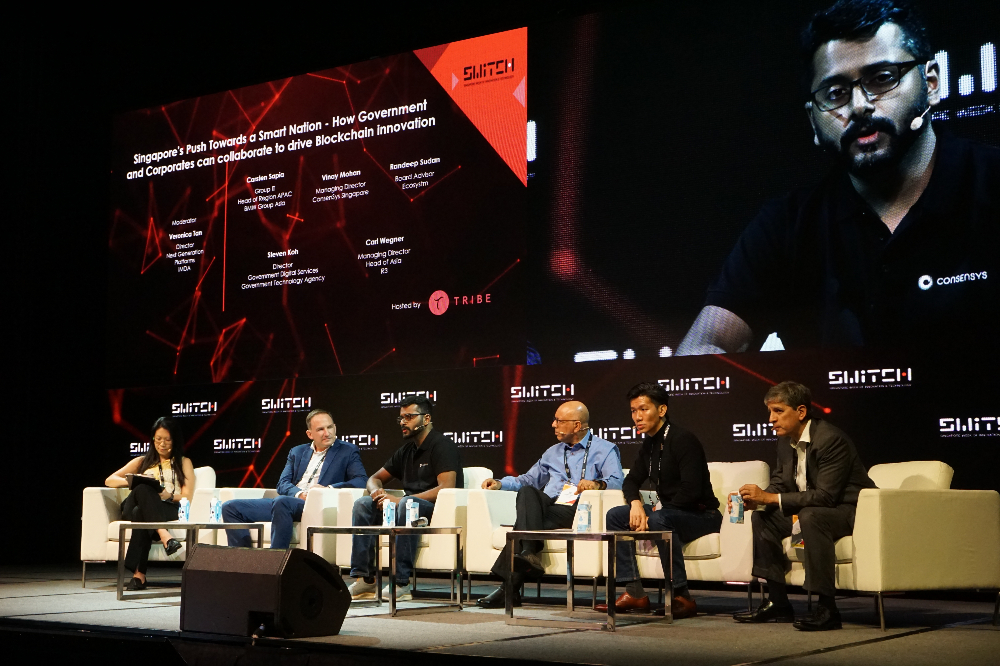 At SFF x SWITCH 2019, a panel of experts discussed how blockchain could be used to enable everything from digital identity to cross-border trade in the context of a smart nation.

Better known as the technology underlying Bitcoin transactions, blockchain is coming into its own with numerous applications emerging across a wide swathe of industry sectors. Serving as a permanent and tamper-resistant digital record of interactions among multiple parties, blockchain promises to overhaul the way companies transact with one another. It comes as no surprise, then, that even government agencies are looking at blockchain technology as a means to coordinate inter-agency efforts and perform cross-border operations.

At the Singapore FinTech Festival and the Singapore Week of Innovation and Technology (SFF x SWITCH), leaders from the tech industry and the public sector convened to discuss ‘Singapore’s Push Towards a Smart Nation—How Government and Corporates Can Collaborate to Drive Blockchain innovation’.

Sharing their insights were Mr Carsten Sapia, group IT and head of the Asia-Pacific region at BMW Group Asia; Mr. Vinay Mohan, managing director at ConsenSys Singapore; Mr Randeep Sudan, board advisor at Ecosystm; Mr Steven Koh, director of the Government Digital Services division at the Government Technology Agency of Singapore (GovTech); and Mr Carl Wegner, managing director and head of Asia at R3. Moderating the discussion was Ms Veronica Tan, director of next-generation platforms at the Infocomm Media Development Authority of Singapore.

Fostering a spirit of innovation

Just as seeds require the right combination of factors to grow, blockchain innovation needs the right environment to flourish. In Mr Mohan’s opinion, Singapore, in her push towards becoming a smart nation, has created the “perfect storm” for emerging technologies such as blockchain to be tested, deployed and scaled.

“What Singapore has to offer, in one simple word, is an ecosystem. It has very fertile foundations and support from all the different sides of the landscape: supportive government, forward-looking policies, regulatory certainty, as well as support from the private sector,” he said.

Of the many potential blockchain applications that could help governments achieve their smart nation goals, digital identity has surfaced as a priority use case. “Unless you have digitised identification of individuals, it is very difficult to provide personalised services,” Mr Singh explained, noting that in addition to better customer satisfaction arising from personalisation of services, the immutable nature of blockchain makes it possible to prevent identity theft or fraud.

Apart from digital identification, Mr. Singh also highlighted that a lot of work is going on in terms of using blockchain for facilitating data markets. Many countries, such as China, Australia and the US are now setting up platforms for digitising and exchanging information.

Yet another potential application of blockchain technology is in the realm of smart mobility, where autonomous vehicle manufacturers, traffic management system vendors and transport authorities will need to coordinate their efforts to ensure the safety of driverless cars on roads.

“Also, if you think about a mobility ecosystem in a smart city like Singapore, it involves a lot of exchange of data. It requires [all players in the mobility space] to identify not only passengers and pedestrians, but also various modes of transportation available and the types of vehicles used,” said Mr Sapia.

Blockchain technology could well be the lynchpin for all this data exchange among multiple stakeholders, said Mr Wegner. “Blockchain is a team sport. The more players [there are operating on a blockchain], the more effective it is,” he quipped.

If implemented correctly, blockchain-based projects can have a much larger impact than initially anticipated, Mr Koh added. He highlighted OpenCerts, a blockchain-based platform used to digitise and verify educational credentials, developed as a collaborative project between GovTech and the Ministry of Education of Singapore.

Eighteen institutions in Singapore are already using the platform, but what surprised Mr Koh was that foreign institutions also began adopting OpenCerts. “You’ll notice that the University of Lithuania already uses it. We also have local startups like Accredify, Next ID and even a Canadian company called Convergence using OpenCerts as well,” he revealed.

OpenCerts also lay the foundation for TradeTrust, another blockchain-based platform for the exchange of digital trade documents, which will enhance security, pre-empt fraud, as well as reduce cost of documentation, said Mr Koh.

And these are just the tip of the iceberg of blockchain applications. Mr Mohan noted that by taking a step back and looking at blockchain technology from a broader perspective, one will realise that at its heart, “blockchain is a very inclusive technology. It is for everyone, not just for people who are at the fringes—it’s also for governments, enterprises and the man or woman on the street.”