Smart Nation Starts With Disrupting Ourselves

Smart Nation Starts With Disrupting Ourselves

Can you see yourself riding a horse to work, instead of a car or the MRT? Or tell the time by looking at the position of the sun, rather than at a clock? How would life today be without modern medicine, machines and other advancements brought about by the Industrial Revolution?

Now, imagine life 100 years from now without advancements and innovative uses of digital technology – where would we be, as a society and nation?

These are the scenarios thrown up by Mr Ng Chee Khern, Permanent Secretary (Smart Nation and Digital Government, or SNDGO), as he underscores the improvements to our daily lives that technology will inevitably bring – a development the Smart Nation initiative wants to capitalise on to Singapore’s advantage.

One of the challenges Mr Ng faces is how best to communicate to the public why Smart Nation is so important for Singapore. Rather than extol the benefits of individual projects, he positions Smart Nation as a factor in the country’s continued survival. In a hypothetical future, if executives from foreign MNCs see relocation to Singapore as a “hardship” posting because we lack the amenities of other major cities, then, in Mr Ng’s view, Singapore is “finished”.

However, the projects in themselves remain important as they make a more immediate difference to the lives of Singaporeans. Among the many Strategic National Projects under way, the Smart Nation Sensor Platform will harness sensor data to facilitate cost-effective municipal planning and enhance public security. The data captured can be accessed and analysed by public agencies to generate insights for creating solutions that improve citizens’ lives.

Besides major infrastructure projects, a smaller yet still impactful initiative is Parking.sg. The app makes it easier to pay for parking at 1,100 public car parks not equipped with electronic gantries, via credit or debit card instead of paper coupons.

Many of the current Strategic National Projects are about creating a digital infrastructure that allows new applications to be built on top of them. Mr Ng shared that subsequent projects will be geared towards national-level challenges such as healthcare, the economy and employment.

Regardless of scale, all projects must benefit both citizens and businesses, and have what Mr Ng calls a “strategic coherence” about them – technology not for technology’s sake, but for harnessing its potential to support national agendas.

Beyond these undertakings, Mr Ng, a philosophy-trained former fighter pilot, would also take a step back to contemplate the bigger picture: “[What is] more useful to think about … is, where do we really want to end up as a Smart Nation?”

After all, the digital revolution will bring about vast changes not only to the way we lead our daily lives, but also to the economy and structures such as labour laws, taxes and tax laws, company set-ups, pensions and even what retirement means, Mr Ng points out. “When change is as pervasive as that, you must really probe the reasons for why you are changing something – what is it fundamentally for? What are you aiming at?

“Digital to the core”

Ultimately, Smart Nation must leverage both bottom-up and top-down innovation to enrich the quality of life in Singapore, benefit the larger population and maintain the nation’s competitiveness, he says.

A key way to do so is to go “digital to the core”. At the individual level, people must have the skills and mindset to “think digital”, and exploit digital tools and services. At the enterprise or government level, it means building digital tools that place citizens at the heart of the design such that they will address pain points in society, and be easy to use.

Going digital requires a paradigm shift and a different sort of precision: “To be really ‘digital to the core’, [or] really transformative, implies a completely different business model, not just to make current processes or models somewhat better,” he adds.

Technology, he notes, must be adopted for the right reasons and in the right ways. The greater challenge lies not in finding or creating the technology, but how to apply policy to the use and impact of technology.

Borrowing examples from the private sector, Mr Ng remarks that Facebook, Amazon, Microsoft, Apple and Google were not the first companies in their fields of business. Their technologies were not significantly better or more sophisticated than those of the predecessors they displaced. What they had were better business models that could exploit those technologies, turning them into the technology giants of today.

Along the way, Mr Ng has encountered an unexpected challenge: “One thing that surprised me a bit is that there are significant portions of the Singapore public that seem to be not as receptive and welcoming of technology as I’d have expected,” he says. But the future is inexorably digital – and we cannot afford to be left behind. He admits life may be “unpleasant” for some, as technology displaces certain types of jobs. Increased connectivity will also threaten existing expectations about work-life balance and retirement.

“Most people will be engaged with work to a much later stage of their lives. Similarly, at any moment in time, it will be harder to disassociate from work… You’re too connected.” 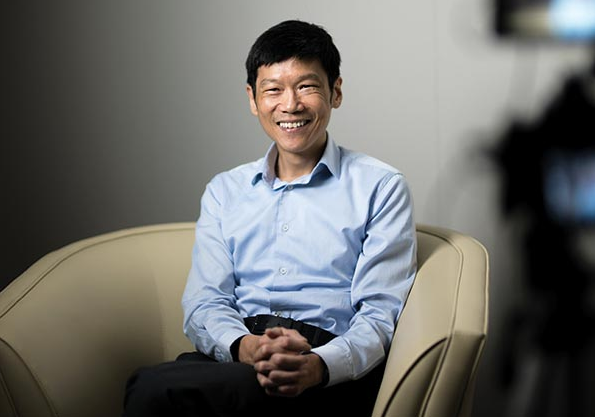 Mr Ng is passionate about bringing the people and private sectors along the Smart Nation journey. His advice to younger colleagues: Find opportunities to tune out and recharge. Organisations also need to have more informal discussions and “ring-fence” time off for people to reflect. “Otherwise, if you are always caught up in a quick-tempo, quick-response mentality, there won’t be sufficient insights.”

Still, he stresses, these reservations notwithstanding, “technology moves and will make life better for most people… society as a whole can’t stay still”.

One way to get Singaporeans on board with Smart Nation is to appeal to their emotions. “In Singapore, we tend to over-emphasise the rational approach to life… In many ways, we don’t appeal to people’s emotions enough,” Mr Ng muses.

That’s another task on the SNDGO’s agenda, going beyond technology.

Smart Nation is also about inspiring people, communicating a narrative of hope, and building a groundswell of support so that the movement goes beyond government. For Smart Nation to succeed, Mr Ng says, it will have to tap the enthusiasm, innovation and passion of the private and people sectors too.

“We do have to bring the population along, and hopefully not just with public campaigns, but to start off [with education] so that people are not just aware, but are comfortable and welcoming of technology,” he says.

“Move 100 years from now, and the sort of digital technology will be such that I’m sure that whatever it is… life will be so much better in so many different ways. I cannot even imagine how life would be like if [we] just stay as we are now.”

This article first appeared in Challenge. Photo courtesy of Challenge.